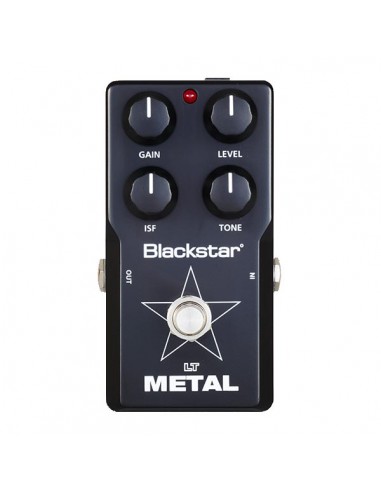 The LT METAL is the guitar pedal designed to deliver the aggressive high gain tones that modern guitarists need. It features Blackstar’s patented ISF (Infinite Shape Feature) circuit, giving you infinite adjustment over the characteristics of the tone control and taking you from scooped US high gain to classic British heavy metal and anywhere in between.

The Gain control adjusts the amount of distortion that the pedal will deliver. As the LT METAL Gain control is increased clockwise (CW) the sound will become more distorted until, at its maximum position, an extreme metal lead tone is arrived at.

The Tone control allows exact adjustment of the treble frequencies within the sound. At low settings, counter clockwise (CCW), the sound will be warm and darker in character. As the control is increased clockwise (CW) the sound will become brighter. At the maximum settings the tone will be aggressive and cutting.

A unique clipping circuit in the LT Pedals has been designed and tested to behave just like our successful HT pedals.

All the LT Pedals are able to be ran using a 9V battery or by using a 9V DC power input.

The ISF control works in conjunction with the Tone control. It allows you to choose the exact tone signature you prefer. Fully CCW is a more American characteristic with a tight bottom end and more aggressive middle, and fully CW is a British characteristic which is more ‘woody’ and less aggressive.